The Pre-Order has ended, VBS are now in stock!

Included in the kit: 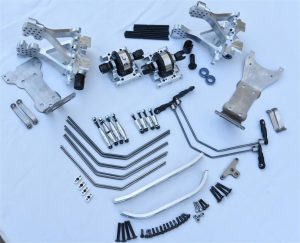 Below is a page out of history, the Gen 4 VBS which became the Gen 5:

In the beginning came the T-Maxx. It revolutionized the truck world. I think this surprised Traxxas as much as it did everyone else. They came up with a simple yet effective method for attaching the suspension to the chassis and holding onto things like the differential gears and shock towers.

Those of us high performance folks quickly found the weaknesses in this system. This is not to say that there is anything wrong with the Traxxas design, it clearly does as it’s intended to do.

Many aftermarket manufacturers addressed some of these problems by replicating the stock plastic system in stronger materials, these were heavy and still didn’t address some of the underlying weaknesses.

Here at Unlimited Engineering we simply don’t replicate plastic in metal. We always seek out to improve the design’s function along with weight and strength. Many of you have noticed that we don’t have a bulkhead. There’s a reason for this.

I set out 2+ years ago to replace the system that connects the suspension to the chassis and holds the gears with something new. Something not only stronger, but with that actually was advantageous to the handling of the truck and light as possible.

Today we have finally succeeded and not without many hurdles along the way.

All these have not only been met, but we exceeded even our own expectations.

The Victory Bulkless System is sure to bring home the prize. In recent races VBS equipped trucks have always lapped the competition.

A: Yes, the VBS is designed to work with any Maxx derivative that conforms to the Traxxas standards of mounting points.

Q: Do I have to run them both front and rear?

A: No, you may use only one, as long as you use the same gear type front and rear you’ll be fine.

Q: What happens if I break one, pretty expensive to replace?

A: In the unlikely event that you do manage to damage one, yes, it’s true it would be expensive to replace, though with the UE insurance policy this should take the sting out of it.

Q: I already have aftermarket skidplates, can I use them?

A: The answer to this is No, and Yes. No, they are not a direct fit. Yes, you can modify most aftermarket skidplates to work with the VBS if you have the ability to modify them. We will provide a hold template. I have personally done so during the prototype phase of this project using one of the popular aftermarket Titanium skids.

Q: Can stock like suspensions with rear turnbuckles be used?

A: Yes, there’s a T-Bar that attaches to the rear bulkless for this purpose. Those running the RacerX which doesn’t use a rear turnbuckle will leave this off – as shown in the pics.

Q: What will be included in the kits?

A: I will offer the VBS in a variety of ways, towered & towerless, from just one unit (front or rear) up to full blown kits with gears, setup kits, skid plates and bumpers. With the new site w/ shopping cart coming on-line very soon this will be a lot easier. One or three full kits and otherwise piece together what you want.

Welcome to the new Unlimited Engineering Site. Please bear with us as we work through a few bugs. Report any bugs to sales@ueusa.net or in our Support Forum. Thank you for your patience. Dismiss